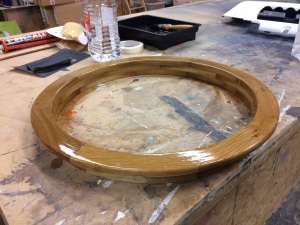 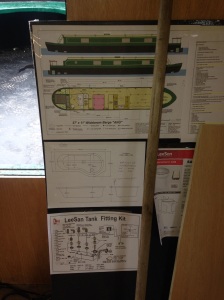 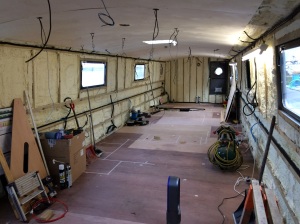 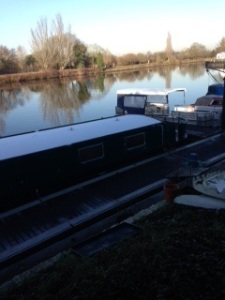 ‘ Bathing is a very lonely business.

Except for fish…fish all bathe together. Though they do tend to eat one another.’ ( Hobson & Arthur  – ‘ Arthur ‘ )

Well, it’s been a while since I had any time to write this blog, as we have just moved off The Island…

Previous readers may know how much we loved living there  ( my post: Island Life covers this subject ) but ’tis done…and onwards we go, to the next adventure.

So, feeling the need to remind myself  of the goal in sight, I went to see Keith, Cameron and Kieran at my new home to be- Hart’s Boatyard- to discover the latest joys of their  progress on my boat, Anú.

Sitting in the water, a wonder to behold, with her paint shining- the Shannon Green I chose way back in August last year, and with a lovely new canopy over the stern.

As my last post covered ‘ technical’ bits and bobs ( Anú 2 – Something For The Boys )  I thought it was only fair to bring all you ladies up to speed with the finer points of  the delicate art of home- making on the water.

As good as his word, Kieran- another of my fantastic boat builders- has now  wired Anú for sound, with speakers in the ceiling and remote access, so that I can play my music all over the boat, in any space I choose.

Regular readers will certainly know about my passions for both music and dance ( see my posts: Music Was My First Love and Shall We Dance? ) and not a day goes by that I don’t tune in and have a bit of a sing – I hope the fish won’t mind.

Kieran took me to see the new wardrobes in the bedroom.

Keith was listening when I told him I need plenty of space for my clothes – they are wonderfully spacious and yet so cleverly done that they utilise the area beautifully…well done chaps!

And then Keith showed me the bath.

Now I know not everybody has a bath fitted on their boat, but as I explained before, I do like to bathe- particularly in the winter and after a cold game of tennis.

As so often happens, a scene from one of my -and Molly’s-favourite films popped into my head. Song lyrics, or lines from films tend to come to me at random moments. It’s to do with being a writer, I think, and loving words.

I immediately thought of the bathing scene in the film ‘ Arthur’, where the very wonderful Dudley Moore and Sir John Gielgud ( as his butler, Hobson ) discuss the merits of bathing and whether or not it is better to bathe alone or in company.

I was fascinated to learn from Keith- who is an endless source of boating knowledge- that when I bathe onboard Anú, I will actually be bathing in the river!

This is because ( and excuse me if I get this wrong, Keith! ) when you’re in the bath, the bath level is actually BELOW the level of the river, so you are in fact up to your knees in the river Thames.

This is appropriately, and rather wonderfully, known as ‘ The Swim.’ NB: Look out for another post coming shortly on other Boating Terms!

My bath also doesn’t have a plug in it, but rather, a switch.

I couldn’t help but start to laugh at all this info, and of course, began to think of Dudders and how I would certainly not be bathing alone ( though I might like to wear a Top Hat in the bath, as he does )  but would be feeling at one with the fishes.

‘ Perhaps’ said Keith, ‘ you might enjoy a glass -bottomed bath for a better view?’

Now we were getting into the realms of my ultimate fantasy- which has always been myself as a Mermaid, à la Ariel in The Little Mermaid, or ( in my childhood )  Aqua Marina, from Thunderbirds and Stingray.

‘ I don’t think that would be as romantic as my fantasy Keith, I replied,  ‘ as the only things likely to float by in The Thames would be the odd plimsoll, beer can or Pike, rather than exotic species and I really don’t fancy seeing an eel swim past my leg as I bathe.’

On this note, we agreed to keep the bath non- transparent.

Keith then asked me if I would like to see my newly – varnished Porthole ( as per pic .)

As we went into the Marine workshop, it occurred to me yet again how very lucky I am to be having my own boat built to my exact spec.

How often in life is anything made for us with such loving care?

Everything on Anú will be crafted and built by Master Craftsmen, with skill and patience and love for boats and the water.

My own father is a Shipwright, and has a love of, and interest in, ships and boats and how they are built too, so I think it must be in the blood.

How can it fail to be anything other than happy, to live on such a vessel, entirely made of love, talent, hard work  and good vibes?

At this point, just as I was about to leave, the workshop door opened, and in came Cam bearing a massive Paellera.

Holding enough food to feed about 12, it contained Cuban Chicken, which my new neighbour Vinny, who is very  popular, and  known at his restaurant as ‘ The Naughty chef,’ had  made for our lunch ( pic)

It was absolutely delicious.